A Woman's Right to Nag

Hubs: (A perplexed expression on his face) I am sure, I caught him off guard. I tend to do that most of the times. Not being a novice himself, he recovered quickly and said not at all dear.

To tell you the truth, I was just doing live research for the post...ha

In a relationship between any man and woman, we have already set our stereotypes. A beer drinking, football watching man, who does not give any heed to the woman. A harridan, whose main pleasure is to scream at the man to do chores. We do come across such people in our lives but there are people who have some tricks up their sleeves and do not have to convert their home & hearth into a battleground.

You come to know of each other's likes and dislikes after living together for some years. You might on occasion want to escape from the mountain of housework and chores both of you are putting off. The problem happens when one of the parties has a different idea and timeline for the chore at hand than the other. Usually, it’s the woman who wants the work to be done as soon as possible and the man does not think it is urgent enough. And most of it surrounds housework.
I have experienced it myself, the frantic need to complete the housework as if I was participating in 'Housework Olympics'. I still have remnants of that disease but am slowly getting cured. I think, it’s a natural reaction, as we get over trained by our mothers at a young age ('Beti sasural jaake humari naak mat kat dena, tumko sab kaam aana chahiye'). We have seen our mothers do it and we take it as our Mantra.

Men, on the other hand think we are 'cuckoo' exhibiting such idiosyncrasies. They think it’s a waste of time and energy doing the same things over an over again. Also, they are clueless about our obsession with chores. Folding and putting away washed clothes in a drawer, neatly stacking washed and dried cutlery, folding of bedcovers are such few examples.

Mostly, women have been associated with the term nagging. Why do we Nag?, the following situation will make it clear.

A man and woman are watching TV. A man gets up and goes to the kitchen to make some popcorn. He is not a least bit conscious about the condition of the kitchen platform, the dirty dishes in the sink, and the toys on the floor. He will grab a bag of popcorn, put it in the microwave, pop it and afterwards dump it in a Bowl. He will leave the empty bag on the countertop and come back to the living room. For him, anything other than popcorn is irrelevant at that time.

Now, the woman goes to get a glass of water. She will see the bag of popcorn on the counter, put it trash, she will pick up the toys and put them in their place. Clean up the dirty dishes, wipe the counter clean, by that time, her anger has reached dangerous levels. She thinks the man noticed the dirty dishes and still did not clean them. He saw the mess in the kitchen but avoided doing all the chores. She comes out and starts a verbal clash with the man. She feels that she is the one doing all the chores and feels unappreciated. She feels he deliberately has not done the chores. She starts nagging him to help her around the house.

The man is left confused, he does not understand the reason, why the woman is so upset? She just went to get a glass of water, right? Then why is she screaming at me? 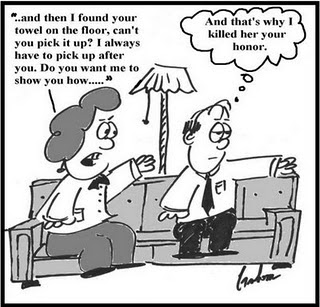 Another complaint most women have, Men don't listen!!! The reason could be this....

Me: I spoke to Y, she said she just got a call from Z.

Hubs: So is Z coming?

Me: Actually Y said, Z is having some problem with the car and needs to show it to the mechanic. The mechanic will check and let her know what the problem is. Her car is quite old so she needs to get it repaired often.

Me: Y said it would be better if she trades it in for a newer model. What do you think?

Me: We should giver Z the number of the Car place we saw the other day.

Me: You are not even listening to me, you don't love me anymore.

Hubs: Something clicks in his brain. No sweety...I heard everything you said and I love you a lot. So is Z coming?

Me: I dunno, Y said Z will call me and let me know.

So are we at fault or Men actually don't listen?

There have been many scientific studies on this, men not listening, women talking too much and blah blah...

The bottom line is, we are as different as chalk and cheese. Our communications will always be filled with sugar and spice. The unfathomable gap will always remain...only thing we need to do is, that women try to simply their communications with men and men show their appreciation and support for the women.

Do let me know your interesting experiences about nagging and the men in your life not listening to you.

I am ready for your Bouquets and Brickbats people.....
Girl Stuff Random