- January 27, 2010
Friends, today I would like to pay my respects to those brave souls who faced the brutal regime of Nazis in their concentration camps. Today, 27th January - Holocaust Memorial Day. – marks the 65th anniversary of the liberation of Auschwitz-Birkenau. On this day, the Holocaust Memorial Day Trust is challenging everyone across the UK to become part of a Legacy of Hope.

On Holocaust Memorial Day 2010 – 27th January – we are asking everyone across the UK to pause for a few moments. Pause to remember the victims of Nazi persecution and those who were murdered under exclusionary policies in Cambodia, Bosnia, Rwanda and Darfur. Pause to honour the survivors of those genocides. Most importantly, we are asking you all to become part of The Legacy of Hope. We’re asking everyone to grasp the opportunity to listen to the voices of all who suffered in the Holocaust and under Nazi persecution, and to make the hopes of the survivors part of our shared, safer future – a future that is free from the dangers of exclusion and persecution.

· Holocaust Memorial Day (HMD) takes place annually on the 27 January, the date of the liberation of Auschwitz-Birkenau – the largest Nazi Concentration Camp. 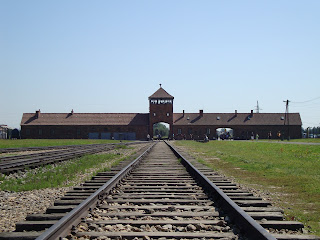 
On HMD we remember the victims and honour the survivors of the Holocaust and Nazi persecution and those from subsequent genocides in Cambodia, Rwanda, Bosnia and during the ongoing atrocities in Darfur.

· HMD is about learning from the past to build a better future; it is about promoting equality, respect and understanding.

· By learning from the past and reflecting on the lessons we learn, we can better understand how to react to issues that affect our society today.

· HMD isn’t just learning about history. It’s learning from history. We want to encourage people to think about what action they can take after HMD which will have a positive impact on their community.

· HMD is a day for everyone. The messages of HMD are relevant to us all, regardless of our background, religion, race or community. We can use HMD to celebrate the differences between us and create a safer, better future for us all.

· Visit www.hmd.org.uk to find out how you can become part of The Legacy of Hope. 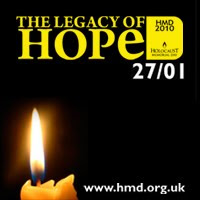 · This year’s HMD marks the 65th anniversary of the liberation of Auschwitz-Birkenau.

· The number of Holocaust survivors who have built their lives, communities and families in the UK are inevitably diminishing, and, as they become frail, their thoughts are turning to their future remembrance and the preservation of their memory. On HMD 2010, we all have an opportunity to become part of their Legacy of Hope.

· It’s our responsibility to remember those who were persecuted and murdered, because their lives were wasted. Our challenge is to make the experience and words of the victims and survivors of the Holocaust and subsequent genocides a meaningful part of our future. · We hope the words and experience of victims and survivors will help people to think about their own attitudes, behaviour and choices, the way they vote, the way they interact with others and the way they respect and celebrate differences.

· On HMD 2010, we hope people will think about how they can make a difference in their own communities, asking themselves what they can do today to build a safer, stronger society so that the risk of the building blocks of genocide ever being laid is removed.
Nerdy Talk