Showing posts from January, 2009
Show All

- January 24, 2009
Don't get thrown off by the title of the post...It isn't about Raveena Tandon..the forgotten Bollywood Actress...Its about A-la Maid or Au-pair. If you still haven't figured it out, let me elaborate. Its about Maids and Domestic Helpers in India (Calling them servants is considered politically incorrect in today's world). I have had a love hate relationship with this breed since I took the reins of running our household. Thankfully I never had to deal with them immediately after my marriage since MIL was handling that headache. Better Half (BH) was being transferred and promoted with precision every year and so I like a dutiful wife followed him to the corners of India. This brought me in contact with the domestic worker breed from various places. Even if the language and custom changes with every area the personality of this breed remains constant wherever you will go. They are people you cant live without. They are a topic of discussion between womenfriends and n
5 comments
Read more

I have recently purchased a pair of boots after searching for months together since, I am really finicky about the heels and by the way did I mention that they were on 'SALE'. A sale sign is like a flame which draws moths like me to it. I am sure women will identify with what I am saying. All around me fair damsels of all ages were foraging through the shoes on Sale checking out the highest possible heels. Some were even as high as a length of 'Apsara' Pencil and equally thin. It has always been a mystery to me as how do people really manage to walk in those heels. I remember during my school days a girl wearing too high heels usually came from a well to do family with an access for choosing her own shoes. In my case my sister and I were herded by our pater to a all too familiar shoe shop in the Bazaar and were given a capped budget. Any chance of going overbudget died its own death when our father gave a withering look and we hurried on to buy something else. Not th
17 comments
Read more

I came upon the movie 'Gran Torino' by chance and decided to watch it just because it was directed by Clint Eastwood aka 'Dirty Harry'. I had recently watched 'Changeling' another movie directed by him and had been really impressed with it. The movie starts of with Grumpy old Clint ( Walt Kowalski) at his wife's funeral. It seems he is angry with the world. I was a bit reluctant to go on but with the want of nothing better to do on a Sunday afternoon I decided to continue. The film starts at a very slow pace and people who lack patience will start fidgeting to see a codgy old man slurring racially tinged epithets and in general angry with the himself and the world. First 30 mins and I was hooked. My better half who can master the art of 'snoring away to glory' in superb movies like 'Lord of the Rings was glued to the screen as well. The film is set in Detroit and 'Walt' a retired automotive worker lives in a immigrant dominated neigh
5 comments
Read more

Farewell to a Tumultuous Year

Whew!!! one more year gone....seems like the older you grow the faster the days go by.... In retrospect, the year has been one of the most chaotic and enriching at the same time. It was year of making new friends, losing a few, finding long lost friends, going nearly broke, starting a blog and growing tougher. It was also year of strengthening of marital bond between Moi and better half.... It must be the first time in my life that I am taking stock of 365 days spent on this planet. Maybe am getting wiser-( I can already hear a lot of cackles from Hubby dear, Harya and Sush....) I made friends from across the globe....which was an eyeopener in terms of cultures and language. Even got a chance to make weird hand getsures to communicate with friends from the far east (Most of them can't understand our accent and we theirs). Got used to the sexy British accent (believe me its not even close to what you hear on BBC) where money is pronounced as muny and Bus is Boos (Got the
5 comments
Read more

Hello Everyone I would like to award the Brilliante Weblog Premio Award to ' Cynic in Wonderland '. I simply love the way she writes and every post is superb.....everytime I read her blog...I am laughing my head off...Keep up the good work...
4 comments
Read more

"Can I be your Friend ?" Syndrome

- January 14, 2009
Too much connectivity with people can sometimes prove to be irksome...with the launch of social networking sites it has become more and more easier to be connected to people with a click of a button. Friends of friends suddenly want to know whats new in your life....people whom you have not seen in like a decade suddenly come back in your life, which is good most of the times. I have heard so many of my friends complaining that they frequently get messages like 'Will you accept my friendship?" or " I would like to be your friend" from people trawling the webworld looking for cheap thrills. Same is the case with online Chats...... I am a chataholic who likes to chat with friends back home.That is my only link to India and people since, I am a lone worker at both the places I work and I crave conversation to break the monotony. Somehow (I could never figure this out) but some of my orkut contacts got added to my Gmail chat list and people whom I had added on Orkut
5 comments
Read more

'Defiance' - A story about leadership and courage 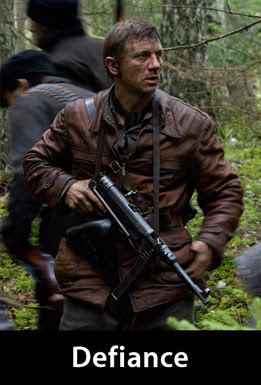 I have recently been reading quite a bit about 'holocaust' - which refers to the extermination of Jews by Nazis during the 2nd World War. It started with the book 'Schindlers List' on which the famous movie was based. Then I read a book called 'I escaped from Auschwitz' written by Rudolf Vrba who escaped from Auschwitz with his friend Alfred Wetzler and informed allies about the Mass Murder taking place in the concentration camp. The 32 page detailed information which which they dicatated to horrified Jewish Officials in Slovakia came to be known as the Vrba-Wetzler Report. Yesterday I saw the movie 'Defiance' based on a true story starring Daniel Craig. It is about four Jewish brothers who escaped from their Nazi Occupied Village in West Belarus in Poland and joined the soviet partisans to fight the Nazis. The brothers rescue around 1200 Jews from the ghettos in Poland. The movie shows the courage and determination of people who want to live and die
2 comments
Read more
More posts