Happy Gudi Padwa to you all 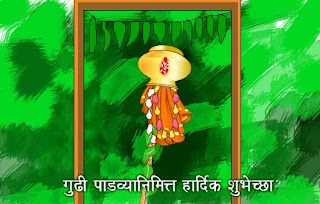 I would Like to wish all my blogging friends a very Happy New Year.

Gudi Padwa marks the beginning of the New Year to the Maharashtrians. The advent of a new year heralds new hopes, new dreams and greater chances of prosperity and wish fulfillment and so it is celebrated with a lot of joy and pompousness throughout Maharashtra. Gudi Padwa, also known as Ugadi, is celebrated on the first day of the Hindu month of Chaitra, which according to the Gregorian calendar would fall sometime at the end of March and the beginning of April. This festival is supposed to mark the beginning of 'Vasant' or spring. According to the 'Brahma Purana', this is the day on which Brahma created the world after the deluge and time began to tick from this day forth. According to Hindu mythology, on the day of Gudi Padwa, Brahma created the universe. It is also believed that it was on this day that Lord Rama killed Bali. It is one of the three and a half days in the Hindu calendar when each and every moment of the day is auspicious.

Unrestrained merriment marks the celebrations of Gudi Padwa. There are several rituals and customs that are associated with the celebration of this festival.

After waking up early in the morning, people clean their homes and decorate the floors with beautifully drawn rangolis. Some even prefer to keep a pot with coconuts, flowers and mango leaves just outside their home. They clad themselves in new clothes as well. Tasteful sweet dishes like shrikhand and jalebis are savored by the people. The ardor and excitement of the people on the occasion of celebration of Gudi Padwa in Maharashtra is great.

Traditionally, families are supposed to begin the festivities by eating the bittersweet leaves of the neem tree. Sometimes, a paste of neem leaves is prepared and mixed with ajwain, gul, tamarind and jaggery. All the members of the family consume this paste, which is believed to purify the blood and strengthen the body's immune system against diseases. The Prasad that you will get in any of the Maharashtra households on the occasion of Gudi Padwa is very different. It is made out of tender Neem leaves, tamarind, Ajwain, gram-pulse and jaggery. According to popular belief, this Prasad strengthens your immunity system and you can fight diseases better.

A 'gudi' is a pole on top of which an upturned brass or silver pot called a kalash is placed. The gudi is covered with a colourful bright green or yellow silk cloth adorned with brocade (zari), and decorated with coconuts, marigolds and mango leaves that symbolize nature's bounty. The floor before Gudi is adorned with rangoli. Gudi, meaning Brahma's flag (Brahmadhvaj), is hoisted by people on the day of Gudi Padwa, as a symbol of victory of good over evil. On Gudi Padwa, you will find gudis hanging out of windows or otherwise prominently displayed in traditional Maharashtrian households.

Gudis are also displayed as they are expected to ward off evil and invite prosperity and good luck into the house.