- March 08, 2013
This is not a post about the band "Fred said right" or about Govinda gyrating to the god awful Hindi song, "meri pant bhi sexy". I am talking about the emergence of a new eye candy in our Bollywood movies.

It is now the dawn of the era of the "female gaze" in Bollywood. The naked male body was never in the limelight, as it is now. Salman Khan set the precedent, when he discarded his shirt in each and every movie, whether it was hot or cold, raining or sunny. Mr. Khan never left a single opportunity to show his 6 packs and bulging biceps, which made several women swoon and gasp for breath.

Who can forget John Abraham in the movie 'Dostana', walking out of the ocean in yellow swimming trunks and giving us a peek of his bum. Priyanka Chopra looked lukewarm in front of him. The voyeuristic camera had lovingly shown us each and every muscle and curve on his body.


In the recent movie 'Aiyaa', the hero Prithviraj is the object of desire for Rani Mukherjee. Throughput the movie, she undresses the hero with her eyes, which is shown in the form of songs, where the hero's body is on prominent display. 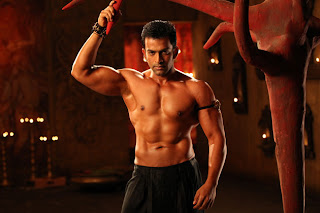 The yesteryear heroes showed their machismo by rescuing the girl from baddies and taking care of darling "Ma". They danced away into the heart of women or by saying dialogues such as "Pushpa, I hate tears". The Hindi film hero of fifties and sixties such as Devanand, Dilip Kumar, Shammi Kappor had fresh faces that reflected love, honesty, honour etc. Each one had their own style of acting and mannerisms that defined them from the other actors. The art of revealing was left to the vamp in the movie.

Then came the 70's and the 80's, where art films and commercial cinema grew hand in hand. The classic look of the Hindi film hero changed and some unusual faces came to fore, Amitabh Bacchachan, Naseeruddin Shah, Amol Palekar, Nana Palekar were a few of them. Still, the shirt remained buttoned and the focus was always on acting prowess. From 50's to the 90's, the female form was shown to be the most desired.

In the past few decades, the hero has undergone a sea change. His image has changed drastically and he is no longer restricted to playing the knight in shining armour, who rescues the heroine and saves the day. He can now help to make a movie, a box office success, by stripping and showing his chiselled abs and bulked up physique. Yes, there are a still a few of them, who without removing their shirts, can still rock the box office.

Bollywood has finally realized that "Yes, Sex Sells and even the hero can sell it". It is no longer the job of the heroine to provide the oomph factor in a Movie. The hero has taken the mantle and is all ready to compete with the heroine.

Hold on my lovelies. Stop drooling and wipe that grin of your face. The era of "Adonis" has arrived.
Girl Stuff Random Total Timepass