- February 06, 2010
I love dogs and I am a sucker for all Dog Movies. I have never bawled my eyes out so much in a movie. This is was a real tear jerker and pulled at my heartstrings. I cried a few tears while reading 'Marley and me', but this movie is in a league of its own. It too is based on a real story. 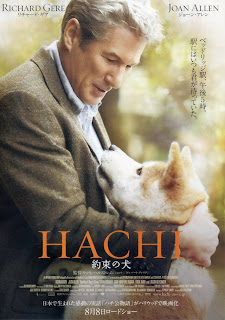 'Hachiko' or Hachi (DVD Version) is a remake of a Japanese film 'Hachiko Monogatari'. The American version is a bit different from the original story. It is about a college professor who adopts an Akita (Japanese dog breed) puppy wandering on the platform of a railway station. That is a beginning of an unbreakable bond between the dog and his master which transcends beyond the death of the master.


Hachiko, during his owner's life, bade him goodbye each day at the front of the station and used to be there at the same place to greet him when the professor came home from work. This ritual continues till one day the professor passes away. He suffers a stroke and never returns home to where his friend is waiting for him.
After the professor's death, his daughter adopts Hachiko, who keeps escaping from her house and comes back each day to the designated spot in front of the railway station to wait for the professor to return. He becomes a stray, but never forgets to return to the station.
He becomes a permanent fixture at the railway station and attracts the attention of commuters who had seen Hachiko with the professor. They feed him during his long wait. After a decade of waiting, Hachiko dies waiting for his owner outside the railway station.
The loyalty of Hachiko brings a lump to your throat. It makes you sob like a baby and you feel like reaching into the screen and cuddling Hachiko. The movie has very few dialogues and the Hachiko's eyes do all the talking.


The actual story of Hachiko is some 80 years old. Here it is as provided by 'Wikepedia'. 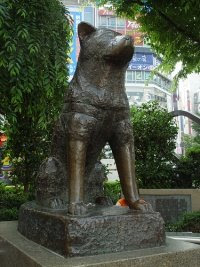 In April 1934, a bronze statue in his likeness was erected at Shibuya Station in Tokyo and Hachikō himself was present at its unveiling. The statue was recycled for the war effort during World War II.


In 1948 The Society for Recreating the Hachikō Statue commissioned Takeshi Ando, son of the original artist who had since died, to make a second statue.


The new statue, which was erected in August 1948, still stands and is an extremely popular meeting spot. The station entrance near this statue is named "Hachikō-guchi", meaning "The Hachikō Exit", and is one of Shibuya Station's five exits.

The movie has been directed quite well without cluttering it with too many characters. The Hero is out and out the dog/dogs that play the character of Hachiko. Even the strong hearted will weep a few tears so, watch it at your own risk. A must watch film for the whole family.
P.S.: Oh, I forgot to mention, drool-worthy 'Richard Gere' is the professor in the movie.
Bow Wow moments Movie Reviews