Wake up Sid- A Movie Review 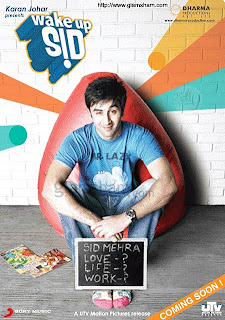 I saw this movie last week. It’s such a rare experience for me to watch a Hindi Movie in a cinema. Most of the times I am left with watching grainy prints on the web trying to decipher the faces of actors.
The movie revolves round a character called 'Sid' played by Ranbir Kapoor. In short, he is a spoilt brat whose father has sacrificed and worked hard and is now loaded with money. Sid is oblivious of the hardships his parents had faced and is completely pampered by his mother and father. His life revolves round his friends a geeky guy and an overweight girl. He spends his time loafing around and blowing cash. He meets a girl called 'Aisha' played by Konkona Sen-sharma at the college farewell party. They become friends in spite of having nothing in common. Aisha is new in Mumbai and is here from Kolkata to become a professional writer. She is older than Sid and is mature. She finds Sid as immature and without any aim in life. Sid is good hearted kid who has lost his way in life. He helps Aisha get settled in a new flat and they become good friends.
Sid gets a reality check, when he fails in the last year of his graduation and finds out that his friends have cleared it. In a fit of anger, over his failure some heated words are exchanged between him and his parents. Sid walks out of the house with no job, no skills and no place to stay. He ends up living in Aisha's flat. His journey of self discovery starts from there. Slowly he realizes that he needs to have his own identity and ends up getting a job as a photographer at the same Magazine where Aisha is working. Aisha starts falling in love with him whereas Sid is oblivious of it. In the end, all is well and Sid also realizes he is in love with Aisha.
This movie is refreshing without any heavy emotional drama. It’s a surprise to see Karan Johar not signing up his usual clan of friends for this movie. It’s a good movie to watch when you want a break from serious stuff. I feel it reflects the lifestyle of today's generation of youngsters very well. Ranbir fits the character of Sid to a 'T'. His performance is very good. I am a big fan of Konkona and she plays each of her roles with aplomb. This movie reminded me of 'Lakshya' a lot, wherein Hrithik wrestles with the same demons as Sid.
Some parts of the movie are debatable. I feel that Sid's parents played a major role in spoiling him. Putting the blame entirely on him was a bit unfair. Also, the pieces fit together too smoothly. Sid never saw the harshness of life. He stayed protected and dependant, first on his parents and then on Aisha. The sudden turnaround in him and the self-discovery part were too slick and candy-coated. I wish life was so easy for all the struggling souls in this world.
In nutshell, the movie is a good one-time watch. It will entertain you without jarring your senses but it will not leave any lasting impression to make you want to see it again.
Movie Reviews