The Curious Incident of the Dog in the Daytime 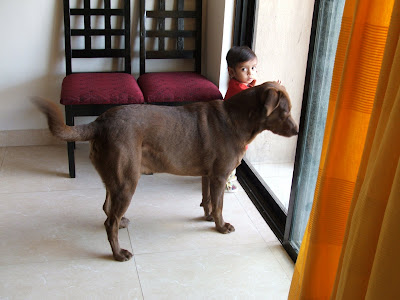 As you can see from the title...yes its about my dog oops you can say ex-dog since he is been adopted by family friends last year when we moved here to Lancaster.

For people who do not know about me, let me just give you a snapshot of my Dog 'Buddy' - a chocolate Labrador retriever. You can read more about him in my first ever post 'Missing Buddy.
He is a very naughty and curious creature.

I was recently having a conversation about Dogs with some friends and I remembered this funny incident worth blogging about.

One day when I was back in good ole Pune-India, I was taking down the laundry from the line and one plastic clip fell on the floor. Any people who own dogs especially a Labrador will know that they eat anything and everything even you have just given them a meal . Buddy just jumped on it and started chewing it vigorously. I ran after him to take it out from his mouth and he thinking it was a game started running even faster around the whole house. By the time I caught up with him he had already swallowed most of it alongwith a metal ring which was 1.5 cms in diameter.
I was in Panic and immediately called up Hubby dearest and the vet. We took him to a Xray clinic for a Abdomen X-ray. The moment we landed there we got angry, weird and horrified stares from the junta who had come for an X Ray at the clinic. They were so surprised to know that we had got our dog for the procedure. In retrospect it seems hilarious but at that time I wanted to scream at those people. In the Xray we could clearly see the ring and it was huge and could cause a lot of problems incase it got suck in the intestines.

We hurried over to the Vet with the Xray and the doc gave him some concoction for Buddy to just throw up and get it out of his sytem.That did not work so the Doc prescribed some laxatives. His instructions were to check Buddy's poop everyday to see if he had passed the ring.

We tried feeding him the laxative with his food , Icecream, Mutton and what not. That dog had some nose and he would just not touch his food. Finally we gave up and turned to the simple most recipe of feeding him Bananas and Banana Milkshakes. He just slurped away on the Milkshake and behaved as if he did not have a care in the world.

The task of monitoring his poop was reluctantly taken over by Hubby (Who would want anyone to see you poking around in dogs poop as if looking for a treasure). I guess he did it half hearted and mostly in the cover of darkness.

The most coveted and awaited ring kept eluding us and we lost our patience. The milkshake routine continued for a fortnight with us being on tenterhooks whereas Mr. Buddy was his playful self. We finally decided to take another Xray to confirm that all was clean and clear. The result was that everything was OK and the ring had passed out.

This incident was one of the many which we encountered while living with our lovable Buddy.

I cherish these moments and wish his new family to enjoy many such moments with Buddy.
Bow Wow moments